On Monday, September 21st, nearly 100 people gathered at The Happy Dog at 5801 Detroit Avenue to listen to stories about Cleveland’s soul.

“The Soul of Cleveland” project was born from discussions of a group including local business owners, educators, architects, arts advocates, artists, and writers. They met from January to June to discuss how they felt about Cleveland, to talk about what made up the soul of the city and inspired its citizens to hope and spurred them to community action. They sent out surveys, asking residents about their favorite spots in the city, their favorite Cleveland memories, Cleveland’s best kept secrets, and more. By last night they’d had over 50 responses and many attendees were eagerly filling out even more.

Nina and Jim Gibans, the project’s progenitors, had originally planned to discuss the survey’s results at their home. They soon realized that they needed a bigger space to accommodate the many people who were interested in participating, and ended up landing at The Happy Dog in Cleveland’s Gordon Square neighborhood, which featured prominently in locals’ survey answers as a “favorite Cleveland neighborhood.”

The event was initially MC’d by Peter Knox, the Director of CWRU’s Baker-Nord Center for the Humanities and a member of the CHC’s Planning and Oversight Committee. Dr. Knox explained that while he moved to Cleveland recently, it was a deliberate and enthusiastic decision because he felt that Cleveland was a “city not just with a soul, but with a beating heart.”

Nina Freedlander Gibans, the founder of the Cleveland Area Arts Council and a recipient of the Cleveland Arts Prize Martha Joseph Citation, introduced the project and gave a brief explanation of the night’s format. David Hassler, the Director of the Wick Poetry Center at Kent State University, formally opened the evening by reading Maple Heights native Mary Oliver’s “Wild Geese” to a rapt crowd:

You do not have to be good.
You do not have to walk on your knees
For a hundred miles through the desert, repenting.
You only have to let the soft animal of your body
love what it loves.
Tell me about your despair, yours, and I will tell you mine.
Meanwhile the world goes on.
Meanwhile the sun and the clear pebbles of the rain
are moving across the landscapes,
over the prairies and the deep trees,
the mountains and the rivers.
Meanwhile the wild geese, high in the clean blue air,
are heading home again.
Whoever you are, no matter how lonely,
the world offers itself to your imagination,
calls to you like the wild geese, harsh and exciting —
over and over announcing your place
in the family of things.

Over the next few hours, many residents got up on stage to share their own stories and memories of Cleveland. Sabine Kretzschmar, the owner of Breadsmith bakery in Lakewood and a graduate of CWRU’s Art History MA program, spoke of the many layers of history in the Shaker Village Historic District. Victoria Mills, the Executive Director of the Doan Brook Watershed Partnership, reminisced about the 1960s when citizens opposed and defeated the Clark and Lee Freeways extension plan that would have connected the 490 and 271 highways, but would have destroyed Doan Brook and the Shaker Lakes in the process. Joe Cimperman, Cleveland’s Ward 3 Councilman, took the stage to fondly remember Daniel Thompson, for whom “Daniel’s Way” (West 2nd Street) is named. Thompson was a civil rights activist and poet who spent his life advocating for the homeless. 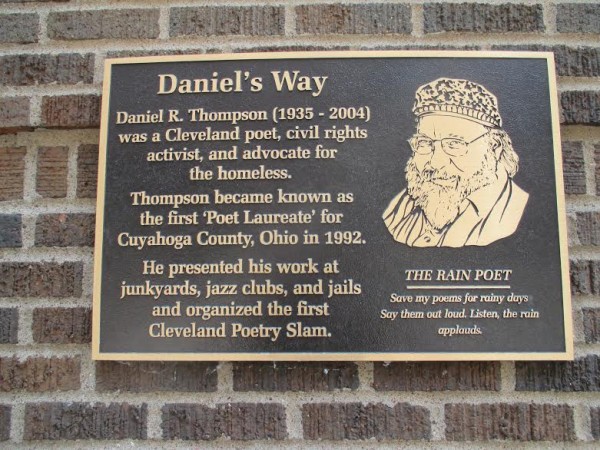 David Giffels, author and recipient of the Cleveland Arts Prize for literature, read an excerpt from his recent book The Hard Way on Purpose regaling the amused crowd with the story of his first Cleveland Browns game and how, while huddled with his family and the tens of thousands of other fans, he wasn’t quite warm in the -36 degree wind chill but instead he felt “something oddly similar to warmth: a shared coldness.” Later, Evelyn Kiefer-Roulet discussed artist Ed Mieczkowski’s life and work in Cleveland and his studio, dubbed his “Idea Garage,” located on Euclid next to Lakeview Cemetery. Jim Gibans and Jennifer Coleman discussed Cleveland’s architecture, and the historical and architectural significance of The Cleveland Arcade.

These are just some of the passionate presenters who spoke last night, and the event was clearly a huge success. The word is out, and it only seems appropriate that the Soul of Cleveland project seems to have taken on a life of its own.

Previous
Next
Scroll To Top