When I tell people how much I love Cleveland, they are surprised. Cleveland is the butt of jokes about everything from the weather (admittedly exciting) to the industrial wastelands of the Rust Belt (still smoking). Yet, I love Cleveland and love it more every day. How can you not love a city that despite being savaged by the last recession has a world-class food and music culture? A major art museum that is still completely free? Where you can get a t-shirt that says “Cleveland is my Paris”? A city whose history as a nexus for immigrants from around the world enabled her to become a leader in social justice?

Two important advocates for social justice have essential ties to Cleveland; one of which has international fame, the other virtually unknown. They are Dr. Martin Luther King, Jr. (1929-1968) and Edith Anisfield Wolf (1889-1963). Their relationship with the city of Cleveland and shared hope for the power of education, books and dialogue to change minds are the inspiration for the 2016 Martin Luther King, Jr. essay contest.

In 1935, Cleveland philanthropist Edith Anisfield Wolf founded what she initially called the John Anisfield Book Award to honor books that deepened our understanding of racism, and enhanced our appreciation of the rich diversity of human cultures. Following the 1944 death of her husband, Eugene Wolf, Edith changed the name of the prize to the Anisfield-Wolf Book Award. Now celebrating 80 years, the Anisfield-Wolf Book Awards have consistently showcased some of the best scholarship and literature on race and diversity. Recipients include Langston Hughes, Zora Neale Hurston, and Nobel Laureates Toni Morrison, Nadine Gordimer, Derek Walcott, and Wole Soyinka.1 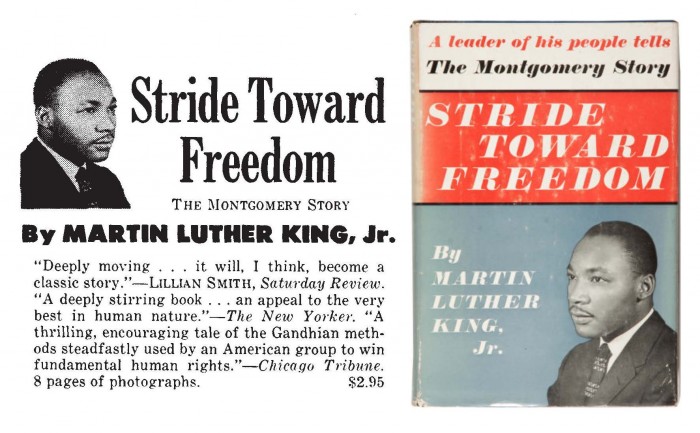 Dr. Martin Luther King, Jr. was recognized by the Anisfield-Wolf book awards in 1959 for Stride Toward Freedom: The Montgomery Story, years before he became a national figure. In his review of King’s book for the Saturday Review, jury chair Ashley Montagu said, “This book, written so beautifully and in such a quiet voice, tells an inspiring story of the victory of integrity over bigotry.”2 Dr. King visited Cleveland several times between 1956 and 1967, speaking in churches, high schools and even street corners. In 1967, Dr. King came to Cleveland to support the mayoral run of Carl Stokes, whose subsequent win made him the first black mayor of a major US city. King visited Cleveland several times in 1967 and a selection from his recently rediscovered speech at Glenville High School, April, 1967 is among the prompts for the MLK essay contest.

Today, the Anisfield-Wolf book awards are administered by the Cleveland Foundation and the selection jury is chaired by Dr. Henry Louis Gates, Jr. He is joined by four internationally recognized writers: poet Rita Dove, novelist Joyce Carol Oates, psychologist Steven Pinker, and historian Simon Schama. Every September, the free award ceremony attracts a diverse crowd of nearly 1,000 people. Winners read from their work and engage the wider Cleveland community with lectures, speaking in libraries and museums, and talking with high school and college students.

The legacy of Edith Anisfield Wolf, Dr. Martin Luther King, Jr., and 80 years of thought-provoking books represent a conversation with our uncomfortable past. Their commitment to social justice, love of the humanities, and faith in a diverse, troubled, fabulous immigrant city continue to give us tools to confront our past and move towards a better future.

1 Wole Soyinka was recognized twice: first in 1983, when he won for his memoir Ake, and then in 2013, when he received the Lifetime Achievement Award
2 Ashley Montagu, “The Saturday Review – Anisfield Wolf Book Awards,” Saturday Review, May 30, 1959: 13

Previous
Next
Scroll To Top