Ms. Morris has also provided an audio recording of her reading her essay: 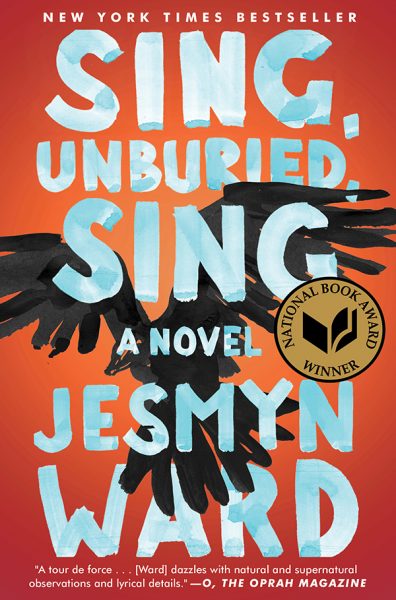 Unfairly targeted, unfairly treated, three generations of African American men suffer at the hands of racism in the Deep South in Jesmyn Ward’s novel, Sing, Unburied, Sing. The novel portrays how racism still exists in the United States, particularly in the Deep South. Primarily set in present-day Mississippi, the book illustrates how racism taints almost every aspect of the black characters’ lives; Jojo, Given, and River all face varying levels of discrimination at the hands of the law. Jojo, the young, innocent, biracial teen boy trying to find his way in the world, experiences police brutality. Given, one of the ghosts in the novel, is River’s deceased son and Jojo’s uncle. Given’s murder trial is grossly mishandled; his murderer, a racist, white man, virtually goes unpunished for his crime, demonstrating a clear judicial bias against Black men. River, Given’s father and Jojo’s grandfather, also experiences unjust treatment from the police and the judicial system; he receives a harsher sentence for a lesser crime than his son’s murderer, revealing how unjust our judicial system is and the need for its reform.

Portrayed as a threat for simply being Black, Jojo is targeted unfairly by the police when they pull Jojo’s family over for a minor traffic violation. The police pull over Leonie, Jojo’s Black mother, because she is swerving. The officer questions Leonie and the car full of a mixed-race family, which causes the policeman to be suspicious. After Leonie reveals that the family is coming from Parchman Prison, a notoriously brutal state prison, the officer immediately orders everyone to get out of the car. He restrains both Leonie and Michael, Jojo’s White father, with handcuffs. The cop must decide between using his last set of handcuffs on either Jojo, the scared, Black child, and Misty, a grown, White woman; ultimately, “the officer looks between the two and makes his decision and walks toward Jojo, his third pair of handcuffs out” (Ward 163). Jojo, in the officer’s eyes, poses more of a threat, simply because he is Black. The officer’s racial bias becomes more apparent when he “draws his gun on him [Jojo],” pointing it at his face, simply because Jojo attempts to grab his gris-gris bag for protection, not a weapon like the officer presumes (163). Jojo, scared, submits to the officer, raising his arms to show he is of no threat, as the officer “kicks his legs apart” with his gun still set on Jojo (164). Thankfully, Jojo remains physically unharmed by the officer, but this instance of police brutality, rather this moment of life and death, speaks to the reality of Black people in this country. African Americans are at risks for being unfairly targeted and treated by law enforcement, even teens young as Jojo.

Although Given, Jojo’s uncle, was murdered sixteen years before the novel begins, his death still speaks to society today, just as his ghost still haunts the characters in the book. Given, who has great potential, in both life and athletics, wants his white teammates to look past his skin color and see him for who he is, a young man with hopes and dreams just like them. His father, River, however, reminds him that his teammates “look at you and see difference,” with their opinion being what ultimately matters (48). When Given and Michael’s cousin, the “kind of boy who dated and hung out with high schoolers even though he was in his early thirties,” make a hunting bet, this lighthearted agreement proves to be fatal for Given (48). Given wins the bet, using his bow and arrow to shoot and kill a deer before Michael’s cousin could. Michael’s cousin cannot handle losing a bet to someone who is Black, so fueled by both alcohol and racism, he shoots Given in cold blood. Despite Michael’s cousin clearly murdering him, Big Joseph, the sheriff, helps his nephew by going to the scene of the crime and deeming it to be a “hunting accident” (50). A jury of presumably all white jurors accepts that Given’s death was a “hunting accident,” which speaks volumes to the systemic racism present within the Deep South; no one cared enough about a Black man’s life to question if it really was a hunting accident or not. Ultimately, Michael’s cousin was sentenced to three years in Parchman with two years’ probation, a virtual slap on the wrist for the murder of an innocent man. Given’s murder demonstrates how the law still favors white men, and justice goes unserved for African American victims. When the murderer’s father angrily berates his son, saying, “This ain’t the old days,” he speaks a partial truth (50); America does have more laws that protect African Americans than before, but America’s implicit racial bias still persists throughout the judicial system, too often protecting the White man at the expense of justice for the Black man.

Earlier in the novel, when fifteen-year-old River is convicted of harboring a fugitive, his brother, Stag, River is sentenced to five years at Parchman Prison, also known as “The Farm.” Stag came home to River after being in a bar fight with a group of White men. One of the men “broke a bottle over Stag’s head,” and in his own defense, “Stag cut him, not enough to kill him, but enough to hurt him” (18). River had no part in the fight, but when “all them White men came to get Stag, they tied us both and took us up the road” (19). River becomes collateral damage in Stag’s violent night out, and the White men revel in the fact that Stag and River were about to “learn what it means to work” by being sent to Parchman, where they would be worked like slaves (19). The White men knew that their actions would go unpunished; despite assaulting Stag and wrongly detaining River, they would never see time in Parchman. In their opinion, River and Stag deserved to go to Parchman simply because they are black; being sentenced to time in Parchman is “To do right by the law of God and man,” meaning that jail is where Black men rightly belong, in both the eyes of God and man (19). Being Black is enough to be a criminal in the South, and River and Stag seem to be at fault for simply existing in the eyes of racist Southerners.

Michael’s cousin’s two-year sentence for murder versus River’s conviction for a nonviolent, contrived offense demonstrates the broken judicial system. A system so broken that while River is in Parchman, he kills Richie, a young, escaped Black prisoner, rather than letting the White guards find him for themselves; River ensures that Richie will die quickly and not be tortured by the guards, who would dismember Richie, cutting him “piece to piece till he was just some bloody, soft, screaming thing” (255). River suffers at the hands of a racially biased judicial system, first with his wrongful imprisonment and then the mishandling of his son’s murder case. The system fails Given and his family; Michael’s cousin’s trial emphasizes the desperate need for judicial reform in America. Jojo, too, suffers from the mishandlings of his uncle’s trial. Jojo’s family never fully heals after Given’s murder, particularly because Given never receives the justice he deserves, which inhibits the family from ever fully healing and recovering. Unfortunately, racism still pumps through the veins of many people, particularly in the Deep South; Ward’s novel gives us a clearer picture of the progress America needs to make regarding equal treatment and protection of African Americans.